Sustrans has a long track record of delivering school programmes that make it easier for families to walk, wheel or cycle to school. In this case, our ambition was matched by Southampton City Council and St. Mary's school, resulting in permanent change and a safer, healthier, and more pleasant school street environment. School Streets are roads outside schools that are closed to vehicles during peak drop-off and pick-up times.

This is to ensure that children and their families can safely walk, wheel, and cycle to school.

With the help of Sustrans, over 70 local authorities have implemented School Streets, resulting in more than 500 schools having schemes in place.

To deliver School Streets that meet the needs of a community, Sustrans takes a people-centred approach.

We work closely with stakeholders, including decision-makers, parents, pupils and residents, to ensure the aim of the scheme is understood and to gain local support.

We use trials to test what is possible and demonstrate the impact of School Streets.

We find that once a school community has experienced the calm, traffic-free environment of a School Street, there is widespread support for permanent implementation. The momentum that flagship projects such as these build is evident in the continued commitment to School Streets in Southampton and across the South.

A commitment from Southampton City Council to implement Schools Streets

The success of these one-day trials led to the installation of retractable bollards, which were officially made permanent in 2020.

Furthermore, four Southampton schools, including St Mary’s CE Primary School, were amongst the forty schools from across the UK selected to participate in the Sustrans Big Pedal School Street event in 2019.

The street closures were successful in creating safer spaces for families to walk, wheel or cycle to school with 92% of survey respondents agreeing or strongly agreeing that the road felt safer to use. St Mary’s CE Primary School, and most of its catchment area, is located to the north of the Bargate ward with a portion of the pupils living in the neighbouring ward of Bevois.

The school is located on Golden Grove, a 20mph road located to the east of the city centre of Southampton.

The school takes in over 600 pupils. Many of the families live in the local residential estates which consist primarily of flats and walk to the school. The area benefits from substantial walking infrastructure, especially through the residential estates where many families commute from or through.

To the north of the school, a main route links to the east side of the city. The multiple bus routes allow families from further away to travel by public transport.

To the east, train tracks to the docks separate the school from the grounds of St Mary’s football stadium. A walkway across the train lines allows access to the school for families from Northam estate.

A school committed to walking and cycling

Having participated in Sustrans' 'Bike It' school programme since 2017, St. Mary's school was already aware of the benefits of walking and cycling to school.

Nonetheless, when a pupil at the school was injured on the school run by a vehicle in the summer of 2017/18, concerns increased about traffic and parked vehicles on school roads.

Parent’s cars on Golden Grove during the school run

Responding to the parents’ appeals, improvements were made at a walking desire line from the estate to the school reception entrance.

The changes included the installation of two bollards at each drop kerb of a crossing point and red tarmac across the road to highlight the crossing point to vehicles.

Following the success of the school’s first School Street, further one-day school street trials were arranged on 17 July and 14 November 2019.

I am very happy if it happens every day

Data collected from this small sample was encouraging for the council team, who had been eager to implement permanent changes.

Design proposals for permanent improvements at Golden Grove started after the July closure.

Sustrans worked closely with the Council team and the highways company Balfour Beatty at feasible designs for the site within the available budget.

It was agreed by all partners that a timed road closure with three closure points should be installed using retractable bollards.

The closure points on Golden Grove would be those used in previous events:

New access to the nearby Albion Towers car park would be made through a neighbouring car park to the north, enabling residents access without having to drive through the closure area.

The final designs from Balfour Beatty also included the removal of the existing wall at Albion Tower car park and new give way markings to keep pedestrian priority along the pavement from the residential estate on the desire line to the school. The changes to the Albion Towers residents' car park wall allowed residents to enter or exit through this point.

We discussed with the school the best approach for sharing the proposed changes with residents and the school community.

Letters were sent to residents and distributed to the parents through the school newsletter.

The letter included information regarding:

Because of the variety of languages spoken in the local area, particular care was made to ensure the language was inclusive and accessible and explanations were accompanied by illustrations of the proposed changes.

The installation was successful and the timed road closure started on the first day of the new term on Monday 24 February 2020. Three colleagues from My Journey, Sustrans and the council were present during the first week to oversee any teething issues, gather feedback from the parents and train the selected school staff on how to manoeuvre the bollards.

The timed road closure was in place daily until 23 March 2020, when a national lockdown was introduced by the government.

The school opened at a limited capacity for staff and pupils during the multiple lockdown periods and embraced the time road closure, combined with staggered opening and closing times, as a means to facilitate social distancing between families. To assess the impact of the timed road closure during the consultation period, we used a variety of monitoring measures:

Sustrans Research and Monitoring Unit (RMU) analysed all the data that was collected and collated an initial report of findings. 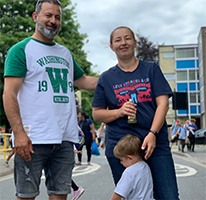 I think it’s amazing. A good opportunity for the kids.

It was crowded and dangerous before because the cars were driving fast.

Now all the people slow down. It’s much safer. I would encourage other schools to do the same.

A key factor in the successful implementation of permanent changes was the excellent partnership between Sustrans, Southampton City Council, Balfour Beatty and the school.

The school’s previous engagement in active travel initiatives such as 'Bike It' meant that key relationships were already in place.

Through open communication and mutual support, key messages and details were shared throughout the project, including collecting parent survey results.

And whilst the modal shift data was inconclusive, the change in perception of safety and ease of travel is a clear indication the timed road closure has had a positive effect.

Every School Street site has challenges and repeating this infrastructure would not be suitable for all school locations.

But for Golden Grove, it has worked perfectly and will continue to support safer journeys to school for many years to come.

Have a look as some of our other projects

How to steward a School Street or Play Street scheme

How schools can promote an active school run

Monitoring the impact of School Streets: safety and traffic displacement